Juan E. Méndez, the UN’s Special Rapporteur on Torture, and Other Cruel, Inhuman, and Degrading Punishment Reports on Torture and Health-care Settings: The Case of Palliative Care 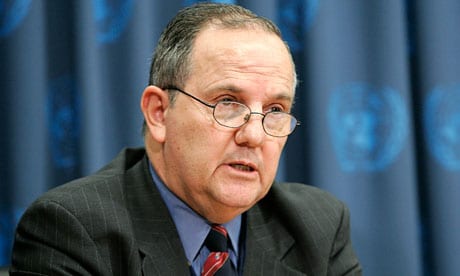 This post was written by Francisco J. Quintana (Legal Intern from Universidad Torcuato Di Tella) and Paula Avila Guillen (Institute Associate) of the O’Neill Institute for National and Global Health Law. Any questions or comments about this post can be directed to fjq2@law.georgetown.edu  or pa390@law.georgetown.edu.

Juan E. Méndez, the UN’s Special Rapporteur on Torture, and Other Cruel, Inhuman, and Degrading Punishment recently presented his 2013 report. [1] In this report, he addresses a wide variety of topics, including a section analyzing different forms of abuse in health-care settings. The report has been broadly covered by the press. Yet, most of the press reports seem to concentrate on just one specific point-Méndez’s arguments regarding restrictions on access and absolute bans on abortion as violating the prohibition of torture and ill-treatment. In this post, we would like to concentrate on another important point analyzed in the report-palliative care.

According to the World Health Organization (WHO), palliative care is understood as “an approach that improves the quality of life of patients and their families facing the problems associated with life-threatening illness, through the prevention and relief of suffering by means of early identification and impeccable assessment and treatment of pain and other problems, physical, psychosocial and spiritual.”[2] In his report, Méndez highlights that “5.5 billion people live in countries with low or no access to controlled medicines and have no or insufficient access to treatment for moderate to severe pain.”  He adds that “83 per cent of the world population has either no or inadequate access to treatment for moderate to severe pain.”

Méndez argues that “generally, denial of pain treatment involves acts of omission rather than commission and results from neglect and poor Government policies, rather than from an intention to inflict suffering.” However, he explains that “when the suffering is severe and meets the minimum threshold under the prohibition against torture and ill-treatment; when the State is, or should be, aware of the suffering, including when no appropriate treatment was offered; and when the Government failed to take all reasonable steps to protect individuals’ physical and mental integrity” denial of pain treatment will constitute cruel, inhuman or degrading treatment or punishment. Mendez adds that “ensuring the availability and accessibility of medications included in the WHO Model List of Essential Medicines is not just a reasonable step but a legal obligation under the Single Convention on Narcotic Drugs 1961.”

Méndez concludes that “[w]hen the failure of States to take positive steps, or to refrain from interfering with health-care services, condemns patients to unnecessary suffering from pain, States not only fall foul of the right to health but may also violate an affirmative obligation under the prohibition of torture and ill-treatment.” Moreover, Méndez recalls that, in a statement issued jointly with the Special Rapporteur on the right to health, on the question of torture, both Rapporteurs reaffirmed that “the failure to ensure access to controlled medicines for the relief of pain and suffering threatens fundamental rights to health and to protection against cruel, inhuman and degrading treatment. Governments must guarantee essential medicines–which include, among others, opioid analgesics–as part of their minimum core obligations under the right to health, and take measures to protect people under their jurisdiction from inhuman and degrading treatment.”[3]

The right to palliative care as a component of the right to be free from cruel, inhumane and degrading treatment has been used by advocates as a recurring legal argument, particularly to combat laws restricting access to, and availability of, opioid medications for cancer and AIDS, however this is the first time that there is a recognition of this argument by a UN Special Rapporteur. However, Mendez did not go into detail to describe the legal framework under which the violations could be brought. The European Court of Human Rights has found the denial of appropriate treatment, a component of the right to health, to constitute torture and cruel, inhuman or degrading treatment on several different occasions. Academics and advocates of the right to palliative care have pointed out that the effective and successful use of such an argument first requires that several questions be answered, many of which have been addressed by this report and others that remain outstanding.

In an attempt to more specifically establish boundaries for determining the appropriate response for adequate pain relief, Human Rights Watch, in its report entitled the “Global State of Pain Treatment: Access to Palliative Care as a Human Right,” established a “test” to determine the circumstances in which a person suffering from severe pain and a lack of access to appropriate treatment might be subject to cruel, inhuman, or degrading treatment. According to this test, a violation occurs when:

In such cases, states will be liable for failing to protect a person from cruel, inhuman, or degrading treatment. [4]

Mendez’s report gives advocates a much needed tool in their fight for access to palliative care.  Even though outstanding legal questions remain, emphasizing the human rights implications of palliative care is a step in the right direction.

[1] Juan E Mendéz, Report of the Special Rapporteur on Torture and Other Cruel, Inhuman or Degrading Treatment or Punishment, UN Doc. A/HRC/22/53.

The views reflected in this blog are those of the individual authors and do not necessarily represent those of the O’Neill Institute for National and Global Health Law or Georgetown University. This blog is solely informational in nature, and not intended as a substitute for competent legal advice from a licensed and retained attorney in your state or country.