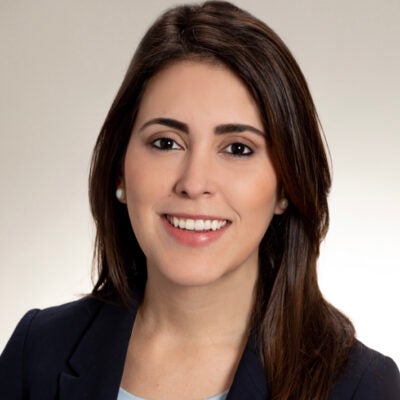 Daniella Piñeros is a candidate for the LL.M. in National and Global Health Law and a member of the class of 2022.

Piñeros is most interested in food and drug law.

Before her enrollment at Georgetown, she worked as a defense medical malpractice attorney in Miami for eight years.

As a law student, Piñeros received the Second Best Brief Award for the National Moot Court Competition Region V. She also served as the staff editor of the St. Thomas Law Review and was selected as one of six students to be part of the Appellate Clinic. In her third year of law school, Piñeros argued in front of the Florida Third District Court of Appeal.

Piñeros holds a certificate in U.S. health law from the Georgetown University Law Center, a J.D. from St. Thomas University School of Law, and a B.A. in political science and international relations from Florida International University.