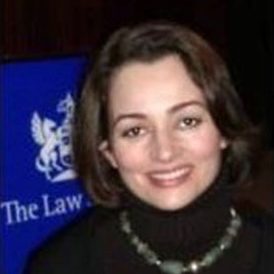 Ghida AlJuburi is a senior scholar with the O’Neill Institute for National and Global Health Law. Her interests lie in exploring the intersection of health, culture, religion, and the law. Her previous research and writings focus on policy initiatives regarding orphan diseases like sickle cell disorders that impact minority, migrant, and immigrant communities. Previously, AlJuburi served as secretary to the board and legal advisor to the chairperson of the Qatar Foundation (QF), an institution with over 50 entities focusing on health, education, research, and community development. Before her tenure at QF, AlJuburi was the general counsel at the office of Qatar’s first lady and helped to build partnerships in health, education, and culture between Qatar and the United States, United Kingdom, Europe, Africa, and Asia. AlJuburi also served as secretary of the board to the Qatar Supreme Council of Health.

AlJuburi holds a Ph.D. from Imperial College, a J.D. from George Mason University, a B.A. from Johns Hopkins, and an MPH from Columbia. She is admitted to practice in both the United States and England and Wales. AlJuburi previously worked as an assistant professor of health care policy and research at Weill-Cornell School of Medicine. She is the founder of Salzay Advisory and is fluent in English and Arabic. AlJuburi serves as a global public health advisor to boards and high-profile board members in the United States and abroad. She also sits on several boards and committees, including the King Hussein Cancer Foundation and Women Forward International.