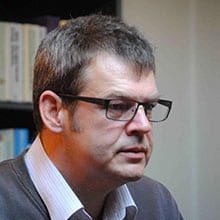 Gorik Ooms is a human rights lawyer. During most of his professional career, he worked with Médecins Sans Frontières Belgium, of which he was the executive director from August 2004 until June 2008. In 2008, he joined the department of public health at the Institute of Tropical Medicine in Antwerp. He was a professor of global health law and governance at the London School of Hygiene and Tropical Medicine from 2017 until 2019. In 2019, he joined HERW!N, a federation of social-circular enterprises in Belgium, because of the impact of climate change on global health.

Ooms has been an adjunct professor of law at Georgetown University since 2010.

Ooms graduated from Catholic University of Leuven in 1989. He holds a Ph.D. in medical sciences from the University of Ghent, where his thesis was on the right to health and the sustainability of health care.