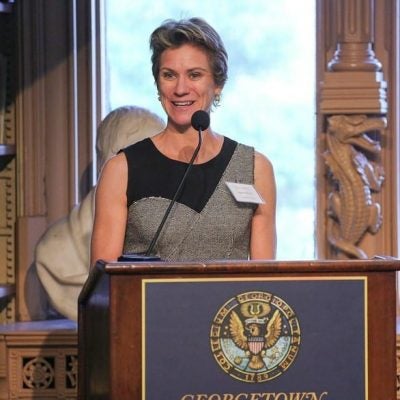 Maeve McKean was the Associate Director of the HIV Policy Lab at the O’Neill Institute and the Executive Director of the Global Health Initiative a cross-university partnership based out of Georgetown University Medical Center. A public health and human rights lawyer, Maeve has spent her career working on the intersection of global health and human rights. Previously Maeve was an Associate Research Professor at the City University of New York’s School of Public Health where she worked to stand up the Center for Immigrant, Refugee and Global Health. A political appointee within the Obama Administration at both the Department of State’s global AIDS program, where she was the first ever Senior Advisor for Human Rights and at the U.S. Department of Health and Human Services Office of Global Affairs leading the work on vulnerable population human rights policy issues, including women and children’s health, in particular issues of violence, and LGBT health.

Maeve graduated from Georgetown University where she received a joint degree from Georgetown Law as well as a Master’s Degree in International Negotiations and Conflict Resolution from the Walsh School of Foreign Service. She worked for United States Senator Dianne Feinstein both in California as well as on Capitol Hill and was a Peace Corps Volunteer in Mozambique. Maeve currently lives in Washington D.C. with her husband and three young children. She teaches Bioethics & Social Justice at the Law Center and Conversations in Global Health at the School of Foreign Service.